MC4 solar panel connectors are single or multi-contacts electrical connectors. Almost all modern solar panels come equipped with pre-wired connectors on the back of the panel, allowing easy connection to other panels to form a “string”.

To make this as easy as possible, most solar panels use a snap-fit Solar Panel connector that can be easily pushed together with your bare hands. The most common connector used today is the MC4 from Multi-Contact, but you’ll still find some Tyco Solarlok and the new SMK style connectors as well. This article covers all of these styles of connectors, and some older and new ones as well. 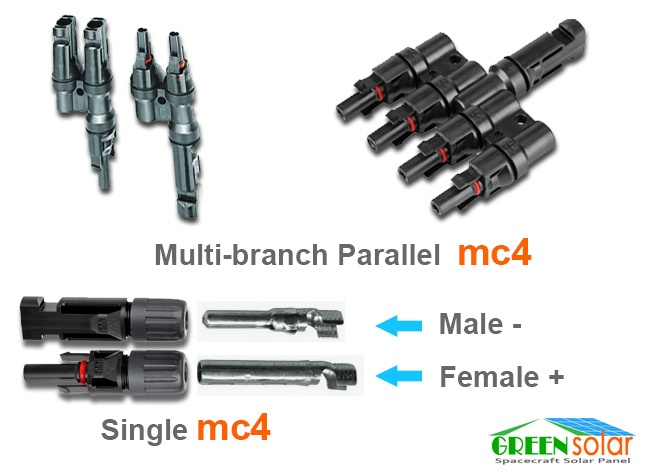 What is mc4 connector?

What does mc4 stand for?

Which mc4 is positive?

What is mc4 cable?

Where they meet they are passed through a hole in the plastic back-sheet, and then into a plastic box, the “junction box“, or “j-box” for short.

What happens then is up to the manufacturer. In the past, the wires were normally connected to a “terminal block”, a piece of plastic with two small metal screws on it.

To connect the panel to a circuit, you’d insert wires into the junction box, typically through a rubber gland, and then use the screws to hold down the copper wire. It was quite similar to wiring up speakers on a stereo system.

This caused all sorts of problems. Any sort of mechanical strain on the wiring could cause them to come loose, and the screws tended to work loose over time on their own.

The sealing around the wire was never perfect, and water, especially humidity, often worked its way in and caused problems. And getting all of the strands of the wire under the screws, without touching the other wires or terminals, isn’t as easy as it sounds.

All of these sorts of problems were minor considerations when arrays were a few panels, and the panels were maybe 80 Watts each.

But in the modern era with panels over 250 Watts run in strings of dozens and arrays of thousands, even the most minor wiring problem represents a real safety hazard.

And all of the problems that can happen in each individual j-box can also happen where the wires from the different panels meet and are connected together, which was also up to the user to handle. Finally, only electricians are really allowed to work with bare wire in this fashion, roofers, labor and do-it-yourselfers would have to have their work inspected – on the back of the installed panel, maybe on the roof.

For all of these reasons, modern panels replace the screw-terminal j-box with one that’s pre-wired. Instead of connecting the wiring inside the box, the j-box comes pre-wired with heavy outdoor cabling and some sort of electrical plug on the end. Which electrical plug to use remains open to the panel manufacturer, and there are a number to choose from.

One of the reasons for the proliferation of different connectors was a US-led effort to allow solar panels to be safely hooked up by anyone.

This was spearheaded by working groups that maintain the US National Electrical Code, or NEC, and most of them came into force in their 2008 update, NEC2008.

The NEC already contained language about “convenience receptacles”, which anyone is allowed to plug in. These cover things like lamps and shavers, the typical two- or three-prong plugs we all see every day. For NEC2008 they expanded the concept of convenience receptacles to cover solar panel connectors as well, as long as they met certain criteria.

Among many requirements for weatherproofing and graceful aging, NEC2008 also demanded that the plugs lock together, so they could only be taken apart again using a special tool. This was to prevent people from casually pulling the system apart when it might be “live”, or things like snow or twigs causing them to open up.

This later requirement was a problem for existing connector systems. Most of these were held together through friction, and could be pulled apart simply by yanking on the wires.

As companies rushed to meet the NEC standards for the growing US market, a number of solutions flourished. But market forces quickly led to a new de-facto standard, MC4.

But let’s look at each one in turn… 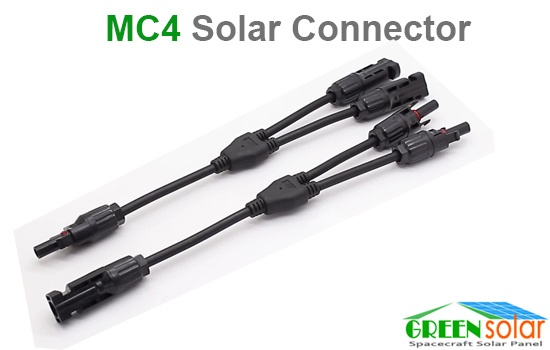 When Multi-Contact found its MC3 locked out of the growing US market, they responded with the MC4. The MC4 is, today, the most common connector found on panels.

The MC4 is electrically very similar to the earlier MC3, but features two plastic tabs on the female connector that lock into slots on the male side and ensure a locking connection.

Removal is easy, but requires a tool – even a pair of needle nose pliers works fine. Unlike Tyco, MC4s only come in one version, females are always positive.

The popularity of the MC4 has produced a wide variety of compatible connectors. One of the best known is the Amphenol Helios H4, which looks and works exactly the same as the MC4.

There are hundreds of similar “clone” products. If you have a connector on the back of a panel, there’s an 80% or better chance it’s an MC4 or one of its clones.

One of the earliest widely used connectors was Multi-Contact’s MC3, first introduced in 1996. MC3 was widespread in Europe, especially Germany, during a time when solar panels were not being widely installed elsewhere.

The MC3 simply pushed together, using ridges on the female plug to secure the plug into the male socket.

However, the MC3 was not locked, you could simply pull it apart again by applying some force. This meant it was ineligible to apply for the “convenience receptacle” rating, a serious limitation.

For those using MC3-equipped panels, a locking solution later emerged in the form of a “clamshell”. The clamshell wrapped around the entire connected cable set, locking it closed. 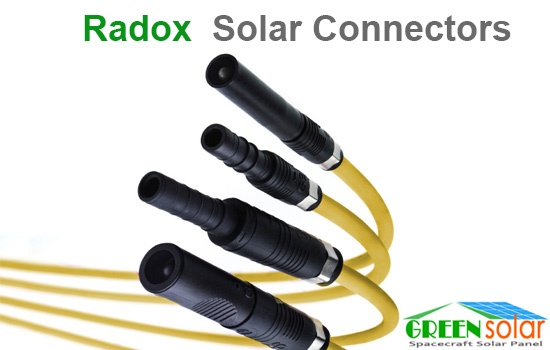 One of the less-known connectors is Huber+Suhner’s Radox, which was widely used only on the REC series of panels prior to their switch to MC4.

Unlike MC3, however, the Radox optionally included a twist-lock connection. Neither version met the “needs a tool” requirement for un-locking, and Radox disappeared along with MC3. 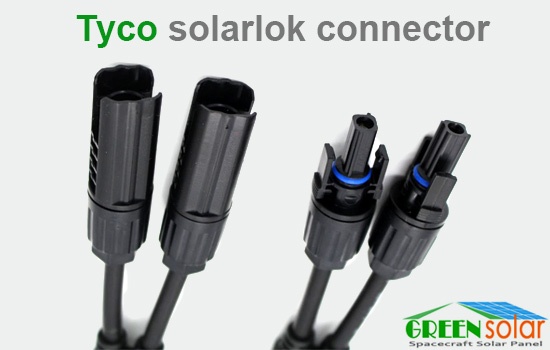 One of the first connectors to meet all of the NEC requirements was from Tyco, a major US electrical goods firm. They introduced the Solarlok, although it’s almost always known as the “Tyco connector“.

One oddity of the Tyco system is that both plugs, male and female, come in positive and negative versions. To make sure the user doesn’t plug a negative into a positive, or vice-versa, the plugs also have a plastic finger known as the “key”.

This means there are actually five different Tyco connectors, plus and minus female, and plus, minus and neutral (unkeyed) male.

Sadly, there’s no standard for which plug you should use where, and so you’ll find panels with either plus or minus on the female.

That means you might try to plug your panel into an inverter and find it won’t fit. You have to be very careful that you order the right connectors, or have “gender bender” cables to convert from one to the other. 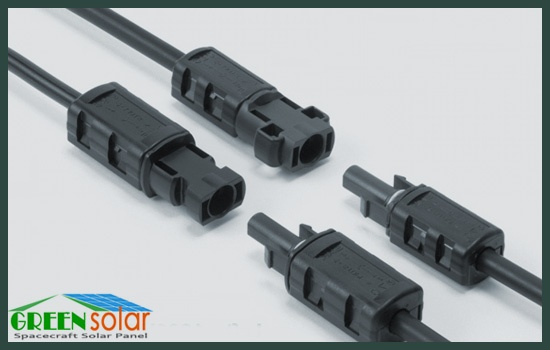 A new entrant into the connector field is SMK solar connector.

These are essentially MC4 clones, but have plastic lips that cover the clips so they cannot be unlocked as easily as a classic MC4.

Instead, the tool has to be slid between the lip and the clip.

Although these would normally fall under the MC4 category, a number of panel manufacturers have started to produce special SMK versions of their panels, so the name is becoming widely known. The best known examples are Sharp and Kyocera panels, who have separate data sheets for their SMK versions. 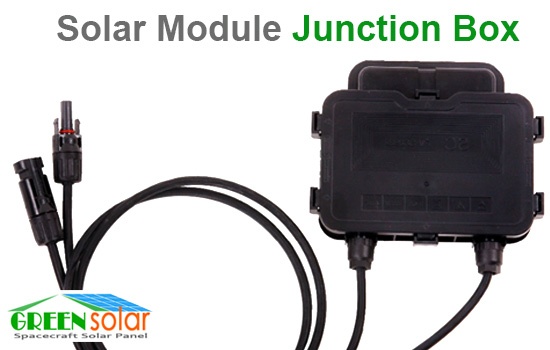 As panel prices fall, manufacturers have been trying to squeeze every efficiency out of their lines. The need to produce two or three different versions of their panels, differing only by the connector on the end of the wire, is precisely the sort of problem one likes to avoid.

Additionally, over the last few years a number of companies have introduced micro-inverters or optimizers that control individual panels, connecting to each other using their own wiring.

With these systems, the existing junction box and wiring is superfluous, it would be better if they connected directly to the panel wiring, ridding themselves of four connectors and cables.

For both of these reasons, a number of European panel manufacturers have started making panels without j-boxes. In their place is a sort of clip, and the panel wiring is left exposed on the top of the clip.

The manufacturer can then produce any number of these panels, knowing that they can easily change the connector at any time. Slide-on j-boxes with MC4s are most common, but Tigo, SolarEdge and a number of other companies make optimizers that used the same clips, avoiding all the cabling.

View all posts by saamok

We are a participant in the Amazon Services LLC Associates Program, an affiliate advertising program designed to provide a means for us to earn fees by linking to Amazon.com and affiliated sites. Amazon and the Amazon logo are trademarks of Amazon.com, Inc. or its affiliates.